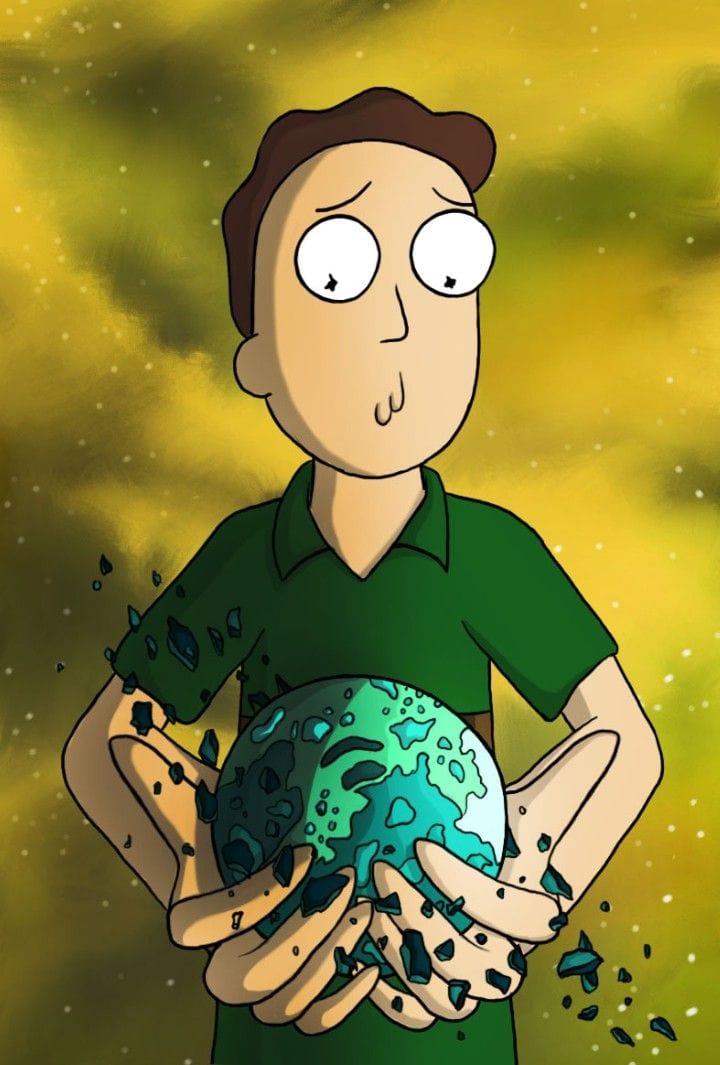 Jerry Smith is one of the main characters of Rick and Morty (TV series). He used to be the family man of the house until season 3. His relationship in order to get well with Rick Sanchez for the control of his family has to be one main theme of the show since he mostly cares for his family’s safety.

Jerry is the husband of Beth Smith, the father of Summer Smith and Morty Smith, and the son-in-law of Rick Sanchez and Mrs. Sanchez/Diane Sanchez, he is also the son of Leonard Smith and Joyce Smith, and the nephew of the Unnamed Uncle, he currently acts as the father and the son-in-law of the Morty Smith and Rick Sanchez from Dimension C-137, respectively. He shares the same history as his C-137 counterpart until the Cronenberg disaster, where it was averted in his dimension. Jerry always tries to think of the best interest of the family, but his attempt to be the patriarch of the family can often be misguided by his self-centered nature. This causes him a great deal of conflict with Rick, as his father-in-law clearly has no respect for him whatsoever.

Jerry’s hair color is dirty brown. He has dimples and wears a dark green shirt, with a brown and beige stripe in the middle. He also wears light blue long pants and black shoes. He is the 2nd tallest main character in the series standing 5’9″, two inches shorter than Rick.

Jerry can sometimes become misguided by his insecurities. He frequently battles with bouts of insecurity and jealousy, being constantly reminded that his marriage is on rocky terms. He also has a habit of quitting when things get too difficult, which became problematic when he tasked a Mr. Meeseeks with helping him to improve his golf game.

In the episode “Something Wicked This Way Comes,” Jerry’s insecurities lead to helping his son Morty on a science project,  which he refuses to concede that Pluto is no longer a planet. This results in him and Morty being abducted, Pluto. Once on Pluto, they are greeted by King Flippy Nips and other Plutonians who hail Jerry as a ‘confirmation-bias’ scientist. Jerry’s popularity on Pluto quickly goes to his head, giving him an inflated ego but ultimately he tells them that Pluto is not a planet after realizing his relationship  his son is more important than being “right.”

Despite Jerry’s weaknesses, he has the ability to channel the inner strength face his fears, such as directly confronting the army of Mr. Meeseeks and destroying his and Beth’s Mytholog’s. He is also a film/TV shows geek (“Mortynight Run”).

Jerry eventually (in “The Rickshank Redemption”) took a stand against Rick’s behavior towards the family, namely his apparent manipulation of Beth’s father issues in order live rent-free and his frequently putting his children in danger. He told Beth that it was him or Rick which led their divorce.