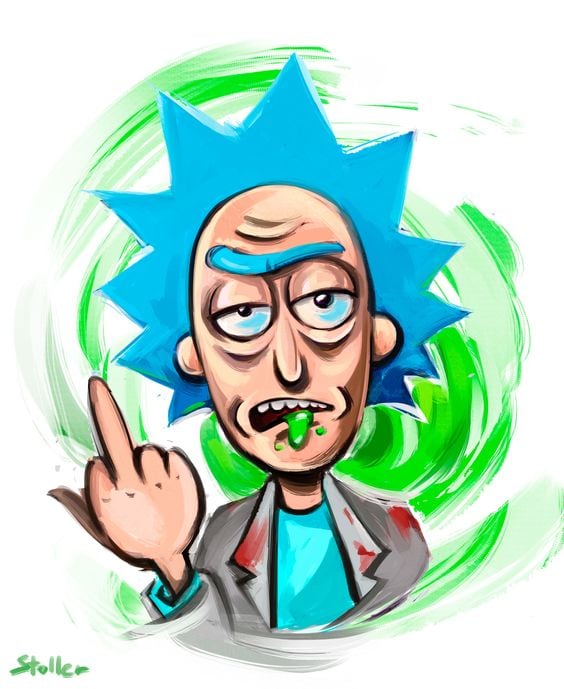 Rick Sanchez is one of the title characters from the Adult Swim animated television series Rick and Morty. Sanchez is a genius misanthropic alcoholic scientist inspired by Emmett “Doc” Brown from Back to the Future. Known for his reckless, nihilistic behavior and pessimistic personality, the character has been well received. He is a sociopathic mad scientist who seems to know everything in the universe and thus finds life a traumatizing and pointless experience. However, despite assuming to be the smartest person in the universe, there have been times where he has been wrong.

Rick Sanches is the father of Beth Smith and the grandfather of Morty Smith and Summer Smith. He is said to have been away from the family for several years prior to the events of the show. He frequently travels on adventures through space and other planets and dimensions with his grandson Morty. Rick is portrayed as a mad scientist; utilizing his mathematical and scientific prowess in conjunction with apathy and egotistical cynicism, he emerges safely from any situation, regardless of the consequences of his self-preservation. Rick also, in some episodes, desperately tries to regain his family after losing their trust. The creators wanted him to look like he was in control strategically, but not at all when it came to personal matters.

Rick’s catchphrase is “Wubba Lubba Dub-Dub”, first introduced in the episode “Meeseeks and Destroy”. In Birdperson’s native language, the catchphrase translates to “I am in great pain. Please help me”

Rick is a grumpy, sociopathic, emotionally abusive, bad-tempered, dismissive, narcissistic, cynical, self-centered, incredibly intelligent and alcoholic mad scientist who often drags his 14-year-old grandson, Morty, and sometimes other members of his family on dangerous adventures. His intelligence makes him believe that existence is miserable and pointless, largely due to his knowledge of infinite universes and timelines with endless possibilities. However, he has proven to be quite wrong on several occasions, even by his more naive grandson. While he has shown signs of loving his family and caring deeply about his best friend Birdperson, he has also been shown to be very self-centered, emotionally abusive and willing threaten, harm or kill on a whim get his own way. He does not fear to speak his mind and give his harsh opinions of the things about his family that easily irritate him. His huge ego and reckless, ethically questionable behavior often lead him to make enemies and getting himself and his family in trouble.

The character has received a positive reception. Speaking of Rick’s relatability and likability, Dan Harmon stated that “we’ve all been Rick. But Rick really does have bigger fish to fry than anybody. He understands everything better than us. So you give him the right to be jaded and dismissive and narcissistic and sociopathic”.David Sims of The Atlantic noted Rick’s “bitter amorality” and called the character “a genius who comfortably thinks of himself as the universe’s cleverest man and is grounded only by his empathy toward other people, which he tries to suppress as much as possible”, therefore writing that Rick’s selflessness at the end of the episode “The Wedding Squanchers” is “the most surprising twist possible”

The character was created by Justin Roiland and Dan Harmon, who first met at Channel 101 in the early 2000s. In 2006, Roiland created The Real Animated Adventures of Doc and Mharti, an animated short parodying the back to the Future characters Doc Brown and Marty McFly, and the precursor  Rick and Morty. The idea for Rick and Morty, in the form of Doc and Mharti, was brought up Adult Swim, and the ideas for a family element and Rick being a grandfather to  Morty were developed. Roiland considers his voice for Rick to be a “horrible Doc Brown manic impression”.